In this new series, I will be looking at the talent in front of the camera. Countless actors and actresses, some lesser known than others, have infused the James Bond films with glamour, humour and style. But who is behind the on-screen character, what else have they done in their career and what are they doing now?

Born 1926 in Nairobi, Kenya, Zena Moyra Marshall was raised on her fathers estate in Africa before being sent to a convent in France at the age of 12. Another stay in a Belgian convent followed. It was in May 1940 that 14 year old Zena Marshall had an almost Flemingesque encounter on a train going from Antwerp to Brussels. Sitting in a railway car with five priests during the time the Nazis began their Blitzkrieg into Belgium, she actually found herself in the company of five Nazi paratroopers in disguise.

After being evacuated to Glasgow, the death of her father and remarriage of her mother, she attended a Roman Catholic boarding school for girls in South Ascot. Marshall spent much of the war living on her fathers estate at Skeffington Hall in Leicestershire while also studying at the renowned Royal Academy of Dramatic Art in London. She also entertained British troops for the Entertainments National Service Association.

Her debut film role was an uncredited one. The 1945 British history film ‘Ceasar and Cleopatra’ by Gabriel Pascal had her starring as a Lady-in-waiting for Queen Cleopatra who was portrayed by Vivien Leigh.

The post-war years kept her busy with small roles and began with ‘The End of the River’ in 1947, a mediocre production filmed mainly on location, along the upper sections of the Amazon River. The following year, Marshall starred in no less than five feature films. The same applied to 1949 and 1950 saw her appearing in four. The workload continued throughout the 1950s, also with frequent appearences on British television in series like ‘Danger Man’ or ‘Richard the Lionheart’.

After over 20 years in film and television, the role Marshall is probably best remembered for is that of sinister secretary “Miss Taro” in the very first James Bond thriller ‘Dr. No’ (1962). Perfectly fitting to the then-image of seductive women, Miss Taro was as devious as she was beautiful. Working for the Chief Secretary of the colonial government in Jamaica, she also acts as an informant for Dr. Julius No, the villain of the film. Contrary to the book by Ian Fleming, her role in the plot was significally expanded for the film version.

Zena Marshall described her role in ‘Dr. No’ as “this attractive little siren, and at the same time I was the spy, a bad woman”. Director Terence Young had asked her to play “not as Chinese, but a Mid-Atlantic woman who men dream about but is not real”. However, Miss Taro was deliberately given an oriental look to subliminally align her with half-chinese villain Dr. No. To achieve that effect, Marshall had to wear a wig and could be seen wearing a blue chinese cheongsam one-piece dress which was made fashionable by socialites and upper class women in the 1920s. Shooting the bedroom scene with actor Sean Connery took three days to film. At the end of the scene, James Bond hands her over to the police for being a spy for villain Dr. No after which Miss Taro spits in his face. Marshall found that scene very difficult to film.

Marshalls role in ‘Dr. No’ might have been small but nonetheless significant. She was the first in a long line of unscrupulous, exotic beauties who would try to entrap Bond but fail.

In her personal life, Zena Marshall has been married three times. Her first marriage to bandleader Paul Adam lasted from 1947 to 1953. Her second marriage to Alexander Ward, a cousin of the earl of Dudley, notoriously ended in 1969 with the then longest divorce trial in the history of English law. Having been married for only a year, Zena Marshall brought the divorce suit against her wealthy husband because of adultery. She named a 40-year-old former model, Anne Cumming-Bell, the duchess of Rutland, as “the other woman”. Her final marriage to film producer Ivan Foxwell (‘The Quiller Memorandum’) in 1991 also ended in divorce in 2002.

Zena Marshall died after a short illness at the age of 83 on 10 July 2009 and is buried at St Thomas a Becket Churchyard in Skeffington, Leicestershire. 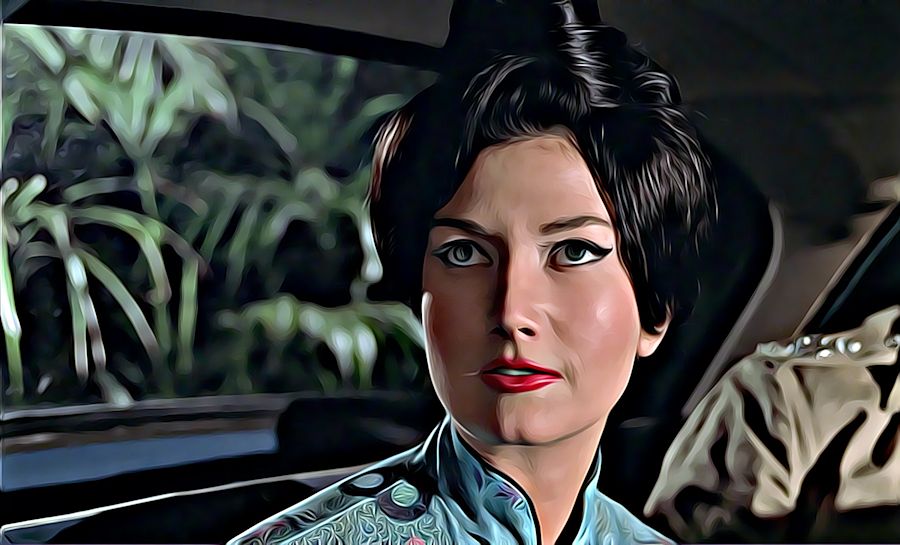