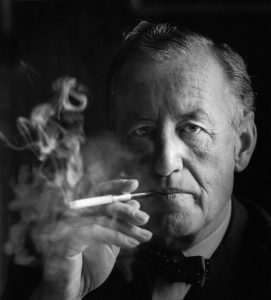 The creator of James Bond was a heavy smoker and drinker throughout his adult life and suffered from heart disease. In 1961, aged 53, he suffered a heart attack and struggled to recuperate. On 11 August 1964, while staying at a hotel in Canterbury, Fleming walked to the Royal St George’s Golf Club for lunch and later dined at his hotel with friends. The day had been tiring for him, and he collapsed with another heart attack shortly after the meal. Fleming died at age 56 in the early morning of 12 August 1964 – his son Caspar’s twelfth birthday. His last recorded words were an apology to the ambulance drivers for having inconvenienced them, saying “I am sorry to trouble you chaps. I don’t know how you get along so fast with the traffic on the roads these days.” Fleming was buried in the churchyard of Sevenhampton village, near Swindon.

MORE ABOUT IAN FLEMING'
If you want to learn more about Ian Flemings life and his novels, please visit the official website of Ian Fleming & Ian Fleming Publications Limited @ www.ianfleming.com