For the first time, the popular Cinestrange Filmfestival in Braunschweig, Germany, integrated James Bond into their programme and unleashed two fabulous Bond Girls onto the streets of Braunschweig. Caroline Munro, nicknamed “The first Lady of Fantasy”, starred alongside Sir Roger Moore in “The Spy who loved me” (1977) as ruthless assassin Naomi, who famously engaged with 007 in a high-octane chase between her helicopter and his white Lotus Esprit. Martine Beswick worked together with Sean Connery – first as the fiery gypsy Zora in “From Russia With Love” (1963) and again as MI6 agent Paula Caplan in “Thunderball” (1965).

On 07 September, both girls were welcomed at Braunschweigs fashionable design hotel Fourside by the Cinestrange organizers and me representing the James Bond Club Germany. At 7 pm, the very first “Bond evening” was held at the Cocktailbar District in co-operation with the James Bond Club Germany. After formally welcoming Caroline and Martine, Bond expert and author Danny Morgenstern first gave an interesting talk centered around the girls before they signed some autographs for eager fans.

When Caroline returned from the nearby Cinema where she had introduced the film “Starcrash” together with Italian director Luigi Cozzi, I introduced my charity documentary “A Bond For Life – How James Bond changed my Life”. During my introduction to the film, I presented Caroline and Martine with specially designed photobooks with plenty of images from their time at the Bond films – a present by the German James Bond club. 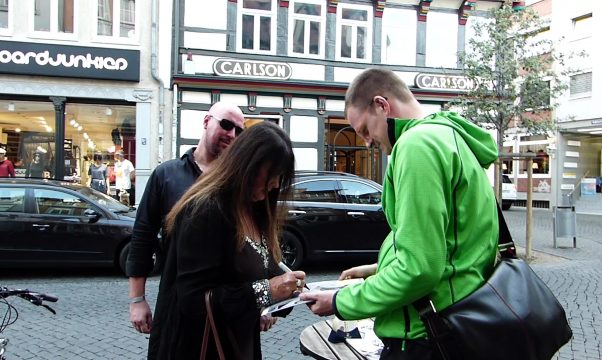 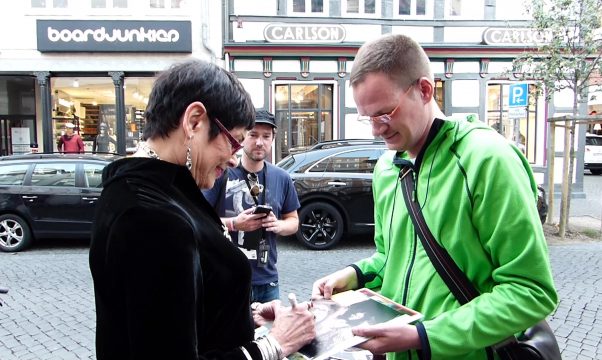 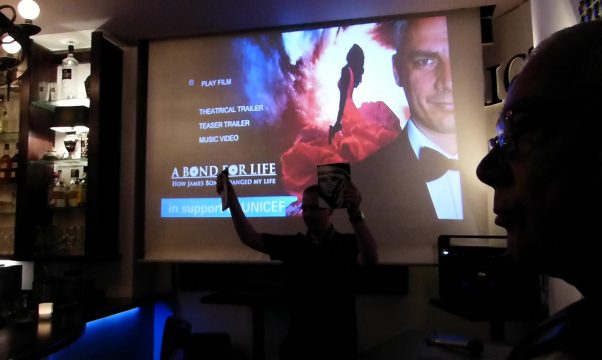 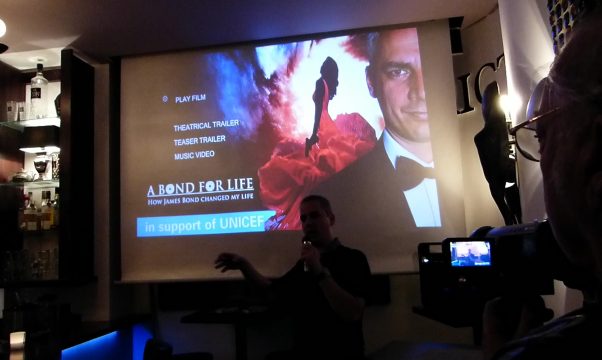 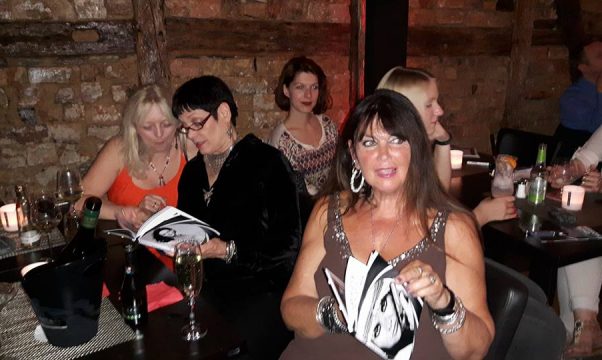 Screening my film in the presence of two Bond girls was of course a great honor, especially because Martine Beswick had recorded a lovely interview with me in Oslo in 2015. It was the first time she saw it on screen. The reactions were fabulous and we continued celebrating well into the night.

On 08 September, after Caroline and Martine had given interviews to local media, we had a quiet lunch in the hotel together with James Bond Club Germany vice president Wolfgang Thürauf. Realising that the interviews before had been lengthy and questions about the Bond films are more or less always the same, we hardly spoke about agent 007. Instead, we had a very nice cultural exchange in discussing English and German table customs and much more.

After a brief shopping trip, the girls kindly agreed to stop by the new British shop in Braunschweig, “Simply British“, where they posed for an impromptu photo session with the decorative English phone booth. While in the shop, I demonstrated the wonderful Beefayre natural wax candles that you can actually use as hand cream once melted. Two of the photos are now in a frame in the shop window as the owners are understandably honored to have welcomed two genuine Bond girls!

At 7 pm, all the guest stars of the festival met for the “Come Together Party” which was again held at the Cocktailbar District. Beside Caroline and Martine, directors John Landis (“Blues Brothers”, “American Werewolf in London”), Mark L. Lester (“Phantom Commando”) and Luigi Cozzi (“Starcrash”) were also in attendance along with German actress Eva Habermann and Oscar nominated costume designer Deborah Nadoolman Landis. It was a grand evening where fans could mingle with their idols and everybody could have a relaxed time. 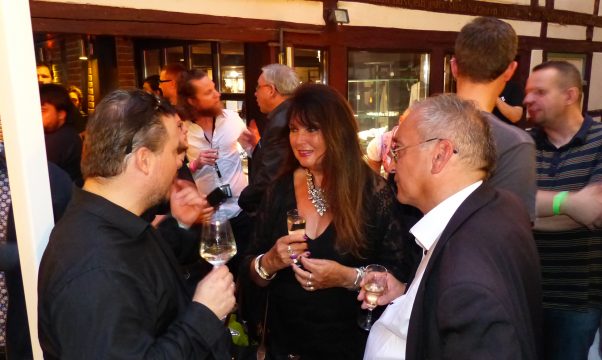 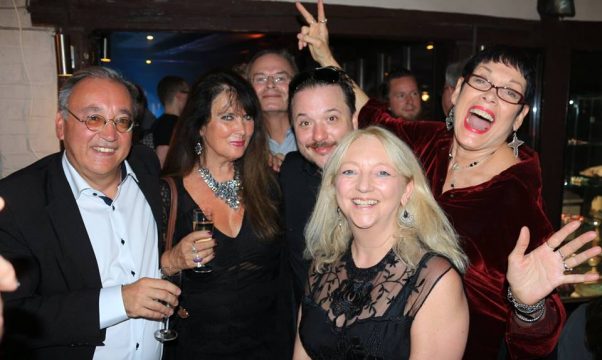 A highlight of the evening was Caroline Munro receiving the Cinestrange Lifetime Achievement Actors Award for her long and admirable screen career. Renowned film scholar Dr. Rolf Giesen gave the laudatory speech and was able to tickle out a few German words since Caroline had done a German commercial for Varta batteries when she was 19. When Martine was asked to say a few words about Caroline, the beauty of their long friendship became apparent to everyone present when she called Caroline her sister and described her as a warm, generous and fabulous person. Visibly touched, Caroline received her award and thanked everyone for the great honor. After the event, we escorted the ladies back to the hotel where we enjoyed a nightcap and some lovely conversation in the beautiful lounge. 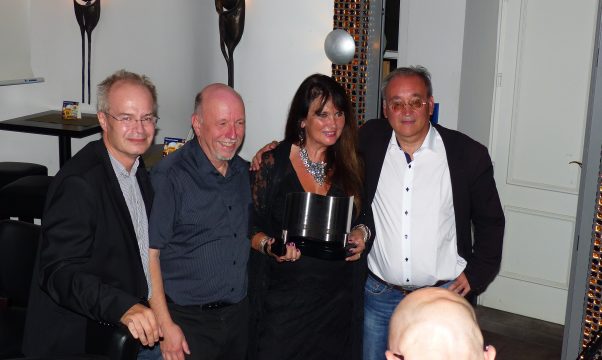 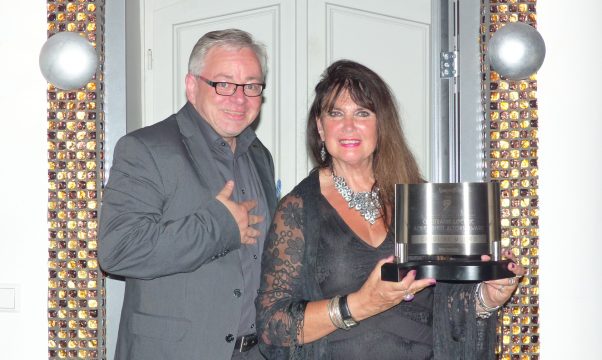 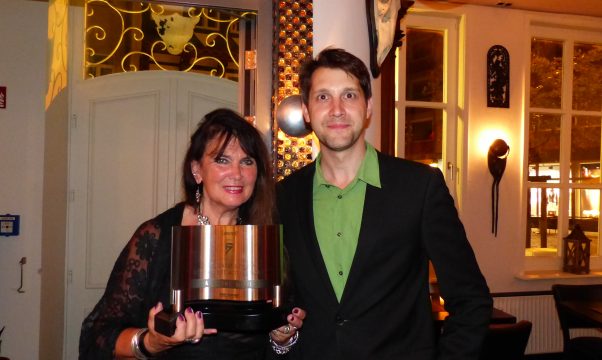 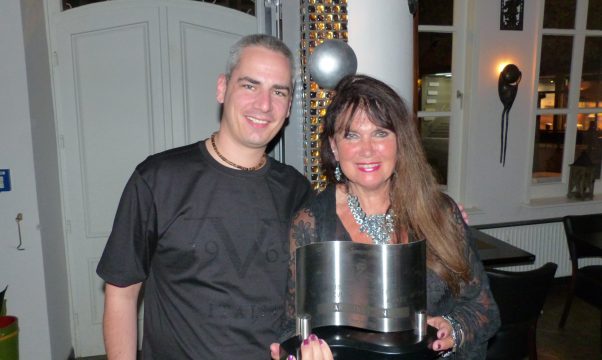 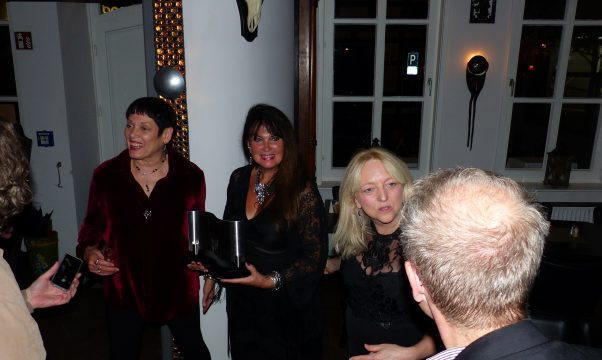 Friday began with a city tour through some of the most historic places of my hometown Brunswick, including the medieval castle square and castle. All festival guest stars attended and were taken in by the stories about Henry the Lion who had founded the city in the 9th century. 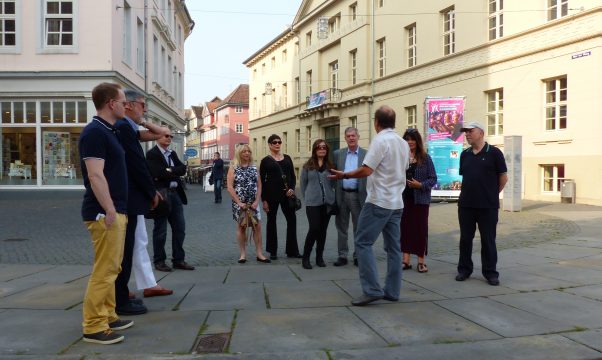 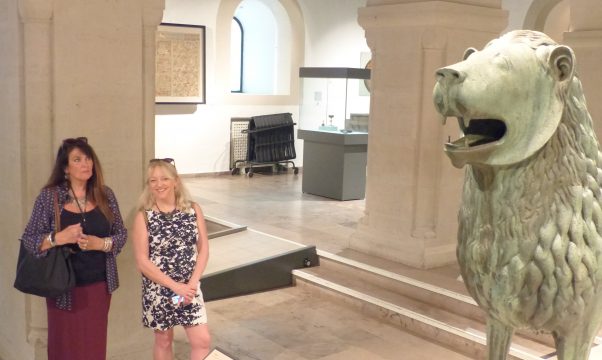 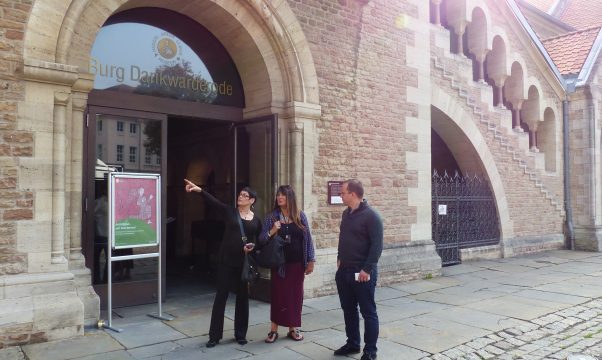 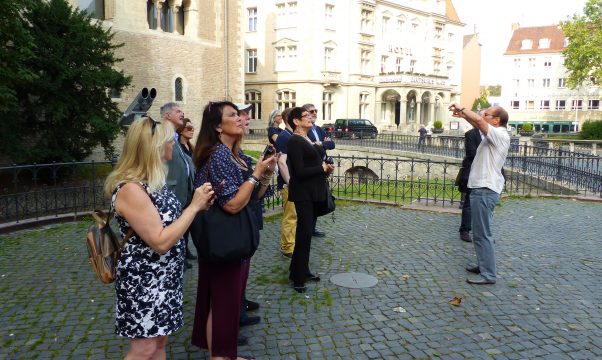 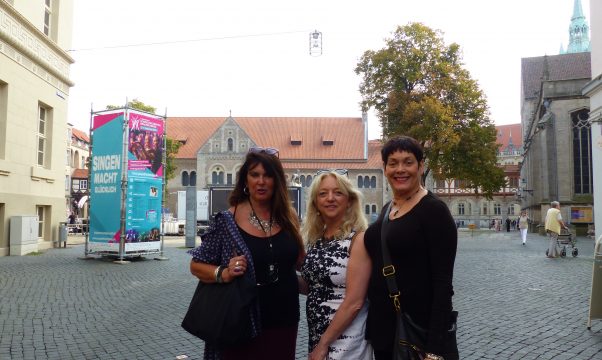 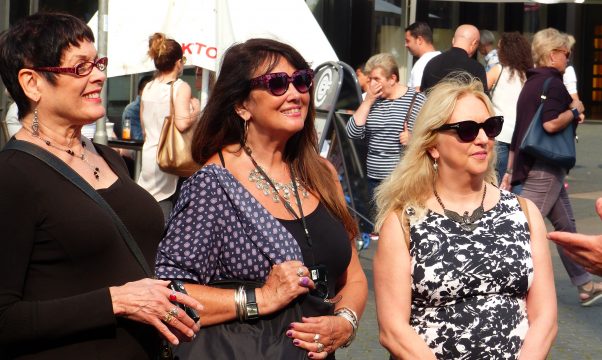 After lunch, the girls and me used the free time wisely and went on another shopping spree which included New Yorker, a very popular German clothing retailer headquartered in Brunswick. Afterwards it was well deserved coffee time at Kohlmarkt, one of the main meeting places in the pedestrian zone with many lovely cafés amidst historic facades from different epochs.

At 3 pm, Caroline and Martine gave a Q&A at the C1 Cinema in which they spoke, in great detail, about their most memorable screen experiences and of course about their time at the Bond films. Bond and film fans were overjoyed to meet the girls up close and personal and being able to throw in some of their own questions. 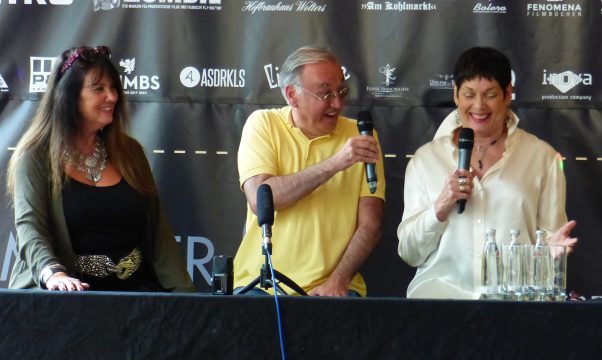 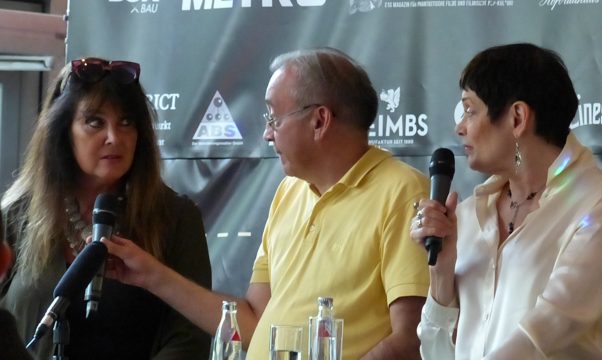 Around 7 pm, all guest stars arrived on the Red Carpet at the C1 Cinema to celebrate the Gala evening which had been given a fantastic Blues Brothers theme with Jake and Elwood greeting the guests as they arrived. 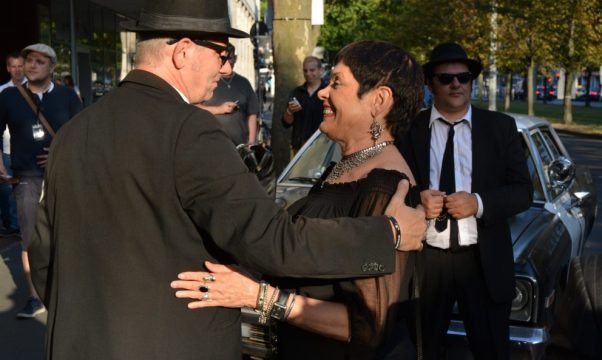 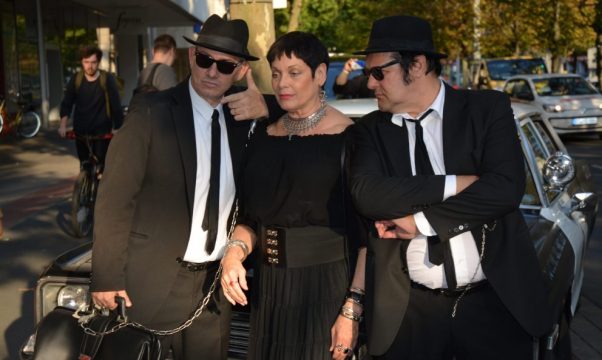 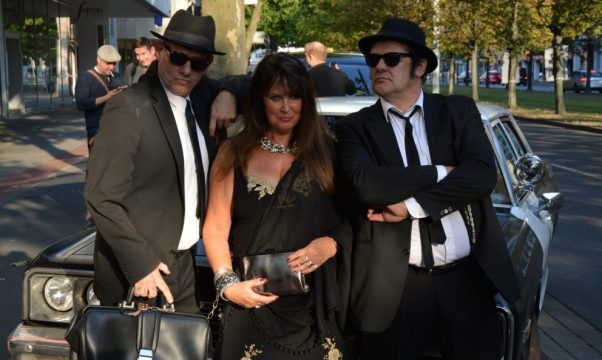 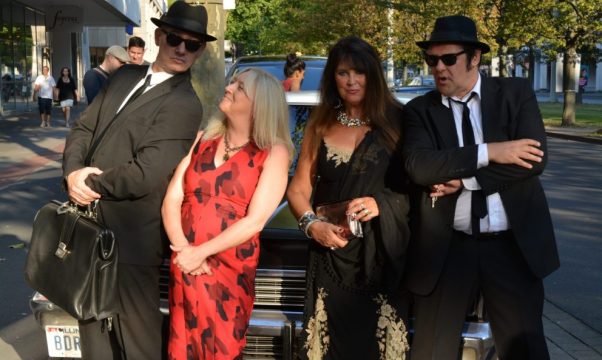 After mingling with fans, signing autographs and taking photos, everybody headed into the screening room to watch Michael Jackson’s “Thriller” which was directed by John Landis who afterwards received the Cinestrange Lifetime Achievement Award. As the 15 minute longer version of “Blues Brothers” was shown in German language, I took Caroline and Martine back to the hotel for dinner. We were joined by director Luigi Cozzi and his wife as well as Connor Heaney and John Walsh of the Harryhausen Foundation. In a very private atmosphere, Caroline, Luigi and me engaged in a discussion about filmmaking and the way modern audiences devour big budget Hollywood entertainment in contrast to films of earlier decades. As Luigis wife sadly couldn’t understand much English and my Italian is not sufficient for dinner conversation, I tried to surprise her with singing the Italian version of Petula Clark’s hit “Downtown”. It was a great evening for everyone!

Thinking back on these three days in which I accompanied Caroline and Martine as a trusty (but hopefully unintrusive) “satellite”, translator and city guide, I must say that I absolutely adored the incredible stamina of them both! So many interviews, so many autographs and photos with fans…and both absolutely doing it with pleasure and tons of fun along the way. Fans and festival guests were positively surprised and enchanted by the two power women…naturally, so was I!

Caroline and Martine, should you read this: GIRLS, YOU CAN COME BACK ANYTIME!!