Just seven months after 007 ELEMENTS opened its doors in the Austrian ski resort Soelden, the impressive structure is eligible for nomination in the 2019 Building of the Year Awards. Everyone can register to vote and thus push the cinematic installation towards winning. 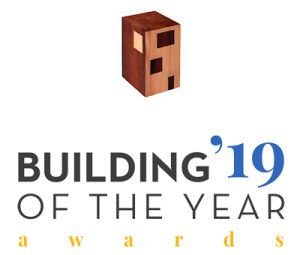 It’s award season and while the film world is already simmering with excitement for Sundays Academy Award ceremony, architectural news weblog ArchDaily has opened the nomination phase for its annual Building of the Year Award.

Now in its tenth year, the prestigious prize has previously been awarded to architectural masterpieces such as Huangshan Mountain Village (2018), the Elbphilharmonie concert hall in Hamburg (2017) or the Matmut Atlantique Stadium in Bordeaux, France (2016).

Recognizing and rewarding the projects that have made an impact in the profession, readers of ArchDaily are asked to nominate eligible projects, thereby constituting an unbiased, distributed network of jurors and peers. It will be their collective intelligence filtering over 4,000 projects down to just 15 stand-outs – the best in each category on ArchDaily.

Nominated in the category “Cultural Architecture”, 007 ELEMENTS, designed by Innsbruck based architects Obermoser arch-omo ZT GmbH, competes against a vast number of buildings from across the globe. Among them, to name just a few, are the Tianjin Binhai Museum in China, Hammershus Visitor Center in Denmark or the Terrassenhaus Berlin in Germany.

Embedded into the spectacular alpine world of Soelden, Austria, 007 ELEMENTS opened its doors on 12 July 2018 and has since fascinated many visitors through the summer and ongoing winter season. Paired with the IceQ restaurant on the 3,048 meter summit of the Gaislachkogl Mountain, the bespoke building combines state-of-the-art technology with stark contemporary architecture and offers a captivating experience through dramatic cinematic soundscapes mixed with interactive technology and visuals, all framed by awe-inspiring natural surroundings.

The nomination stage for the 2019 Building of the Year Award started on February 18th and will end on March 4th. After this, five projects per category will move into the voting stage, starting March 4th and ending on March 11th. The winners will be announced on March 12th, 2019.

This is where we Bond fans come in! Anyone can register on the My ArchDaily platform to nominate/vote. To do so, you must follow the registration button below and complete the required steps to become a registered user. To register you must use a valid email address. Votes coming from users without a valid email address will be removed. You can only nominate/vote for one building per category.