Have you ever heard of Curve Digital Entertainment? This could soon change if the company’s boss Dominic Wheatley gets his wish for releasing a James Bond tie-in game.

Believe it or not but James Bond video games are as old as Roger Moore’s sixth Bond film “Octopussy”. The first ever game, simply entitled “James Bond 007”, was released in 1983 by American toy and game manufacturer Parker Brothers. Since then, there have been a total of 26 Bond video games – which is more than the films of the film franchise. But in all honesty, there hasn’t been a decent Bond video game smash hit since “Bloodstone” in 2010. The remake of the original N64 classic “Goldeneye” one year later wasn’t a big hit with fans and was only surpassed in irrelevance by “007 Legends” which was a complete disaster which led to revoking the license to publish video and PC games based on the James Bond series from Activision.

The latest Bond film “Spectre” didn’t come with a tie-in game and fans of super-spy 007 wondered, if a new Bond game would at all see the light of day anytime soon. In a recent interview with MCV UK, the head of independent British games publisher and developer Curve Digital, Dominic Wheatley, expressed a sincere interest in acquiring the license for publishing an exciting new addition to the impressive list of 007 video games.

“A lot of these bigger firms are not terribly interested in licences now,” he told MCV. “There is a completely justifiable arrogance from the bigger companies who are saying that they don’t need a movie licence. They have Assassin’s Creed and Call of Duty, they have their own IP, so why should they promote someone else’s brand? That is an incredible coming of age for the games industry. But I’d be very happy to have a James Bond licence. We could do a cracking game around that. These are opportunities that might be overlooked by the bigger firms.”

On 7 January 2016, Curve Digital was acquired by the Catalis Group, backed by Private Equity and the parent company of Kuju Entertainment and Testronic, to form a new group – Curve Digital Entertainment. Curve Digital Publishing, the fast growing independent publisher on PC and console formats. London-based, it has just completed its most successful year to date. Curve has published acclaimed titles such as The Swindle, Pumped BMX+ and the Instant Indie compilations – and has a number of key titles lined up for release in 2016, including Cosmochoria, Action Henk and Hue.

Kuju Entertainment, one of the UK’s leading ‘work for hire’ development companies,  encompasses the Zoe Mode and Headstrong Games studios. Kuju is working on titles for Ubisoft, Activision, Nintendo and other major publishers. Kuju also creates its own IP, whilst the Kuju Start-Ups division provides investment and support for the indie games sector. 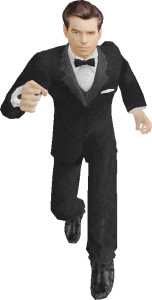 No question, James Bond needs to find his way back to consoles and PC at some point in the near future. The fans are waiting for it but are naturally cautious, having been let down by poorly crafted games in recent years.

Is there a formula for the ultimate Bond game? Not necessarily. It needs to be stylish like 007 himself, feature an original and exciting storyline with solid characters as well as a good balance of shooting and driving levels. A huge task, but not at all impossible to achieve. Maybe Curve Digital Entertainment is the publisher to perfectly blend these ingredients and thus create a surprise Bond smash hit?