Berlin – former nest of spies and pawn in the hands of America and Russia during the cold war. Probably no other city in the world reflects the struggle for power, control and domination but also unity and diversity.

When the James Bond production crew decided to set parts of the plot of ‘Octopussy’ in what was then the East German capital, the city had been divided by a massive, 160 kilometer long wall for over twenty years. A brutal barrier out of massive concrete, well guarded and secured by layers of deathtraps. The famous film scene: James Bond crossing Checkpoint Charlie, crossing point between East and West-Berlin. His superior M fittingly remarks: “Remember 007, you’re on your own.” Bonds serio-comical reply: “Thank you sir, that’s a great comfort.”

Having been featured in the 1983 film with Roger Moore, Berlin was the perfect setting to celebrate the 35th anniversary of ‘Octopussy’. Not only were parts of the film shot on location, Roger Moore had himself been stationed there as an officer in the Combined Services Entertainment section, eventually becoming a captain in command over a small depot in West Germany.

For the main event in the German Spy Museum at Leipziger Platz, the James Bond Club Germany had invited Bond’s leading lady and eponym of the spy thriller – Maud Adams. The 73 year old actress and former model had flown in from her native country Sweden the evening before and was immediately taken in by the buzzing city that, in over two decades, has transformed itself from the bleak and grey Eastern bloc countenance to a diverse and vibrant metropolis.

I was fortunate enough to act as Mauds personal assistant for the day and thus had the opportunity to exchange many stories and thoughts with her. Crossing over Potsdamer Platz, Maud was fascinated to learn, that this had once been the original location of the Octopussy circus tent, a real circus tent no less. Known as the Tempodrom, it opened in 1980 next to the Berlin Wall on the west side of Potsdamer Platz. Today, the area has changed beyond recognition – from a vast open space to high-rising buildings and the Sony Center which houses the German film museum as well as restaurants and a cinema where many recent German Bond premieres have taken place.

Just a short walk away is the German Spy Museum, which provides an interactive and immersive history of the secret services from ancient Egypt until today. Among the many exhibits, you can see one of the few remaining Enigmas – electro-mechanical rotor cipher machines, prominently used by the German Military during the Second World War to decode top secret messages. Naturally, there is a James Bond section – there just has to be.

Having just returned from a location bus tour, a group of over 60 eager Bondfans welcomed Maud Adams in the museum. Divided into three groups, we got a highly informative guided tour through the exhibition that took us on a journey from the early beginnings of coded messages to spy exchanges on the famed Glienicker Bridge to real gadgets like the lipstick gun.

The James Bond part of the exhibition was presented to us by collector Chris Distin, whose screen-used props are on permanent loan to the museum. Having collected them for many years, Chris has accumulated the largest James Bond prop collection in Europe with some extraordinary pieces. Beside the red telephone of M, a rubber gun from ‘The World is Not Enough’ or the Order of Lenin, given to Bond by General Gogol in ‘A View To A Kill’, you can see the lifemasks of Sean Connery and Roger Moore for the production of prosthetics, the exhibits from ‘Octopussy’ were of course center of attention.

Maud was pleasently surprised, when Chris pulled out photo prints of Hervé Villechaize’s personal scrapbook from the production of ‘The Man with the Golden Gun’ (1974). Among some candid portrait snaps of Maud on set in Thailand, a photo no one had ever seen before: A side angle promotional photo of Roger Moore and Maud Adams sitting in the Thai boxing arena.

After the tour had concluded, fans had the opportunity to have their photo taken with Maud in both the Gunbarrel and in front of a wall displaying the history of the James Bond films. Already enjoying every moment, Mauds eyes lit up when she was handed a replica of the famous Golden Gun. She immediately assumed pose in front of a sea of clicking cameras. Two icons reunited.

After an extensive autograph session, Danish magician Michael Frederiksen amused and stunned with some intriguing magic tricks. For one trick, that he had once also performed for James Bond producer Barbara Broccoli, he asked Maud up on stage. Out of nowhere, he produced red balls, made them vanish and reappear in Mauds closed hands. The audience was left astounded.

During the screening of ‘Octopussy’, we enjoyed some downtime and conversation with Maud before she gave an interview for the upcoming documentary ‘For Our Eyes Only: John Glen’ which is set to premiere at the 7th Cineways International Filmestival in Wolfsburg on 01 September this year.

The evening was brought to a close with a Q&A session, led by Bond expert Danny Morgenstern with me acting as a translator for Maud. With an exceptionally well prepared set of questions, Danny was able to extract some stories, that probably have not been heard before and were a joy to listen to. Afterwards, Maud thanked everyone present and said, how much she had enjoyed this special day in Berlin. It really was an “All time high” success! 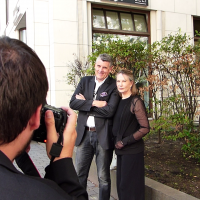 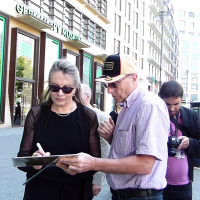 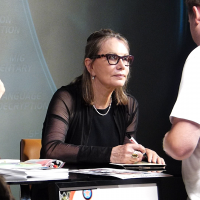 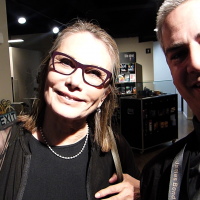 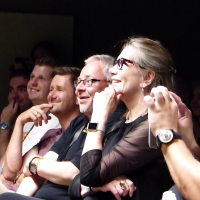 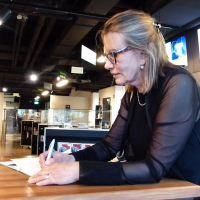