From October 31st to November 2nd, the James Bond Club Germany organised its very first Location Tour entitled “Bond over Nederland” with visits to the ‘Designing 007’ exhibition in Rotterdam as well as the “Diamonds Are Forever” filming Locations in Amsterdam.
I arrived in Rotterdam following a short trip to Belfast which also saw some filming for my upcoming documentary “A Bond For Life” and after a journey with heavy bags, the hotel ship ‘SS Rotterdam’ some of the club members were staying on was quite a unique sight.

After a first meeting in the ‘Ocean Bar’ and the subsequent well-deserved rest in the stunning 1950s design cabin, the next morning surprised us with a Bond-Style watertaxi ride passing the famous Erasmus Bridge. At the Kunsthal Rotterdam, club members were joined by Dutch and Belgian James Bond Fans including Remmert van Braam (jamesbondlifestyle.com) as well as Morten Steingrimsen (jamesbondmagasinet.no) who had come all the way from Norway. Our choice of location for the group photo could not have been more abvious – Sean Connery and the iconic Aston Martin DB5.
The exhibition is really a must see for fans and all of us took a lot of time looking at all the various items from the history of James Bond. As I was tasked with photographing the entire tour, I saw most of it through my camera lens and was thereby able to secure us some neat images.
After spending over two hours in the exhibition and having a Martini afterwards, the group went to lunch and got back together for dinner after a free afternoon. We were treated to a special James Bond Menu in the restaurant ‘Gusto’ and it was nice to see everyone engaging in vivid conversations.
On November 2nd, everybody travelled to nearby Amsterdam where we were welcomed by Bond Location Expert and author Martijn Mulder (‘On the Tracks of 007’). Our first stop was the gorgeous Tuschinski Theater, a lavish 1921 movie theater where the Bond films had their Dutch premieres. The tour gave us an incredible insight into the mind of Abraham Icek Tuschinski who had ordered the construction of the theater which combines the three design styles Amsterdamse School, Art Deco and Jugendstil. The silent movie organ was demonstrated to us…of course with some Bond music.
After that breathtaking experience, we stepped back in time to 1971 by visiting Reguliersgracht 36 where the appartment of Bond Girl Tiffany Case was located in “Diamonds Are Forever”.
Last stop on our tour was ‘Magere Brug’ (‘Skinny Bridge’) which was also used in the film. Mr. Wint and Mr. Kidd watch the scene where the body of Mrs. Whistler is pulled out of the river.
The first Location Tour of the James Bond Club Germany was a well-organised success and we were accompanied by the perfect hosts Remmert van Braam and Martijn Mulder. Again, a big thank you at this point! Future tours are already in preparation and I am very much looking forward to that. 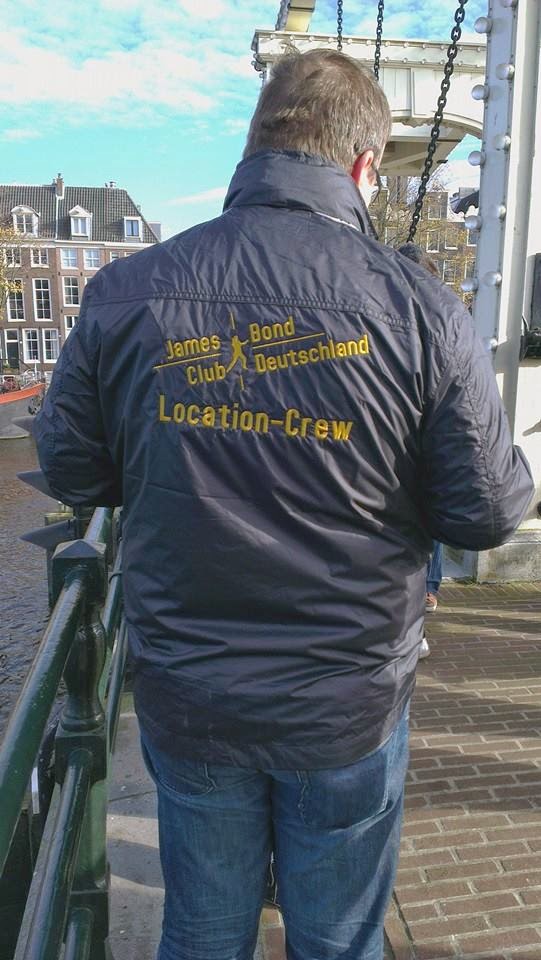 Published in Events and Travel Tips