Allow me to introduce myself...

My name is Lind, Benjamin Lind and I am your Editor in Chief at The Bond Bulletin. I was born in 1981 in Northrine-Westphalia and have since lived in several parts of Germany until I settled down in the wonderful city of Braunschweig in 2001.

When I started this page as a Blogspot blog in 2012, I never anticipated that it would become so huge and popular. This is something I am very thankful for. 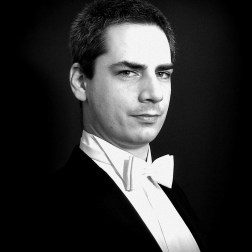 The world of James Bond has been a hobby of mine since 1996 when I saw my first Bond film 'GoldenEye' and I have continued to follow the production of every film since then. In 2014, I became one of the founding members of the James Bond Club Germany and hold a position as adviser in its executive committee. Beside that, I occassionally help with organising Bond events and contribute to book and magazine publications.

In April 2014 I began filming a non-profit fan documentary entitled "A Bond For Life" which celebrated its charity world premiere in March 2016 raising € 2.500 for UNICEF aid operations in Syria. Further funds were raised at screenings in Mannheim (Germany), Madrid (Spain) and Uznach (Switzerland). Filming has taken me on an emotional journey to 135 locations in seven countries and I had the wonderful opportunity to interview many special guest stars who have had an active role in the Bond franchise.

Reporting news from the Bond world isn´t just a hobby, it´s a passion! During the past few years, I have learned that bloggers have indeed earned their place among the professionals, often providing more in-depth coverage of a certain topic away from mainstream media. However, this also means sacrificing a great deal of your leisure time and often working late into the night with countless cups of coffee and the occasional Martini. But the reward is, that I can actively support the longest-running and most successful film franchise in the history of cinema.

My goal at The Bond Bulletin is to provide up-to-date Bond news and interesting insights into the world of agent 007 with a focus on quality rather than quantity.

With this, consider yourself welcome! If you have any questions, suggestions or would like to get in touch with me for anything else, please feel free to send  a mail to benjaminlind@thebondbulletin.de